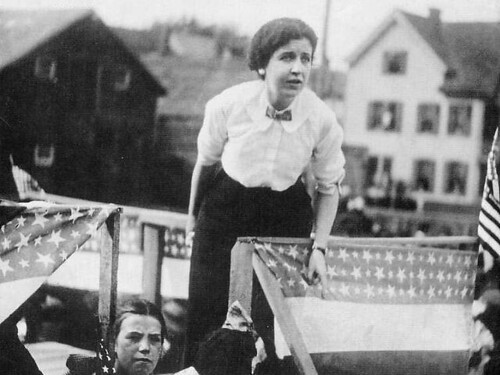 “Is it not much better to even die fighting for something than to have lived an uneventful life, never gotten anything and leaving conditions the same or worse than they were and to have future generations go through the same misery and poverty and degradation?  The only people whose names are recorded in history are those who did something.  The peaceful and indifferent are forgotten; they never new the fighting joy of living.”

Elizabeth Gurley Flynn, from a 1917 speech

Elizabeth Gurley Flynn was born at 12 Montgomery Street in Concord on August 7, 1890 to radical parents Annie Gurley, a seamstress, and Thomas Flynn, a quarry worker.  In 1895 they moved to Manchester, where Thomas worked as a civil engineer.  After short stays in Ohio and Massachusetts, the family moved in 1900 to New York City.  By 1905, the 15-year-old Elizabeth Gurley Flynn already had a reputation as a public speaker and radical agitator.

After Flynn joined the Industrial Workers of the World in 1907, her reputation as a public speaker spread.  Speaking tours took her to sites of strikes and organizing drives throughout the country, including IWW free speech campaigns in Missoula and Spokane and textile strikes in Lawrence and Paterson.  Criss-crossing the country, “Gurley” as she was often called, used her prodigious energy and oratorical skills to raise awareness and money in support of strikers and jailed unionists.  She was arrested multiple times, but never convicted of anything until she was over 60.

As a campaigner for free speech and women’s equality, Flynn was among the founders of the American Civil Liberties Union at the time of the Palmer Raids.  She also founded the Workers Defense League to support labor activists, especially immigrants, who were targeted for repression in the first U.S. “Red Scare.”  Flynn campaigned actively for women’s rights to vote and have access to birth control.

She joined the Communist Party in 1936 and was charged under the Smith Act in 1951, leading to a two-year prison term.  She died in Moscow in 1964.

She corresponded with IWW song-writer Joe Hill during his imprisonment.  But even before they began writing, Hill had published a letter in the IWW newspaper, Solidarity, recommending that the union hire female organizers, “Gurley Flynn, for instance,” to attract more women workers into its ranks.  In his last letter to her, addressed to “Dear Friend Gurley,” Hill wrote, “You have been an inspiration and when I composed The Rebel Girl you was right there and helped me all the time.”