“No part of the past is dead or indifferent.”

In his memoir, You Can’t be Neutral on a Moving Train, Howard Zinn recalls being asked how he could speak so knowledgeably about war, colonialism, and racism yet appeared to be optimistic.  The book is his answer.  In the introduction, he writes:

“History is full of instances where people, against enormous odds, have come together to struggle for liberty and justice, and have won—not often enough, of course, but enough to suggest how much more is possible… 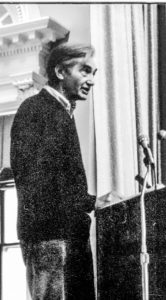 “The essential ingredients of these struggles for justice are human beings who, if only for a moment, if only while beset with fears, step out of line and do something, however small.  And even the smallest, most unheroic of acts, adds to the store of kindling that may be ignited by some surprising circumstance into tumultuous change.”

This website is an attempt to capture the stories of some of those people, from New Hampshire, who “stepped out of line” to challenge patriarchy, violence, racism, capitalism, and other forms of injustice.   In some cases they met success, more often they were lighting sparks that led to change over years or decades.  In many cases they took substantial risks, often suffering imprisonment, assault, even death.  Some of them are well known, others may be a bit obscure.   It is my hope that their stories will help kindle the movements of today and tomorrow.

If you have ideas on stories to add, please use the contact page.  Likewise, if you have suggestions for additions or changes to improve any of the existing stories, please let us know.